A downloadable game for Windows

Press Esc to exit the game at any time

Let me know what you think in the comments!

I enjoyed playing this game, difficult as it was at first, until I reached the last set of levels (11-15), which after getting close (I think) to finishing the game several times, I stopped playing it. At least I don't need to start over from the beginning all over again, since you had thoughtfully allowed for the player to access the other zones/areas from the Menu screen :p

Edit: I managed to finally beat this game within a few days of posting this comment, after trying to complete levels 11 to 15 countless times; thank goodness for the liberty to fire fists in the air at enemies offscreen, the most perilous of which were the birds (& turnips!) :p

Thanks for the comment, happy to see people are still enjoying this long after I released it!    :)   The shooting enemies off screen thing is something I have to use even when I'm playing those last few levels.  They might not even be physically possible without it.   :|   Overall I just wanted to say thank you to people like you who took the time to care about the game and point out some of its fairly obvious flaws that I ignored.  It's been a great learning experience and everybody who gave feedback made making this game worth it for me.

You're welcome :) ; I decided to get back to playing it since it had been a while since I last played it, and I wanted to complete it once and for all :D

Yes, that 'shooting enemies off screen' thing made it possible to get through the game, especially from levels 11 to 15 :p

It's good to know that you've learnt from that experience, and if you are going to continue making games in the future, I'll be sure to keep an eye out for the release of your new games :)

This game is PURE EVIL

Bruh this is a memeful game

great game. how did you do the art style?

I have a suggestion about the punches to make the game more interesting and challenging: max 1 punch at once on screen. If you don't like the idea, can you add this as an option, please? Also rapidfire should be a good thing for this. And some for the prequel "Super Fist Dude", please! :)

The graphics look great and the background music sounds nice too! However, the controls and the overall game feel a bit too slow. And upon seeing the first enemy, my first instinct was to jump on its head which proved to not work. Might want to put a small reminder at the start of the level (like a signboard or something?) to shoot in case others have the instinctive thinking to jump on the enemy heads ala Super Mario.

Great graphics. I found the controls really floaty,l I think it might be more fun if things moved a bit faster and movement was a bit tighter. Great work though.

Thanks! And about the controls, you can duck (Press down) to immediately stop moving on the ground.

I love the graphics, enemies are so cute.

Thanks for the video! Made some changes to make the game a bit more fair in V1.0.1

I think it's time for another run. ;) 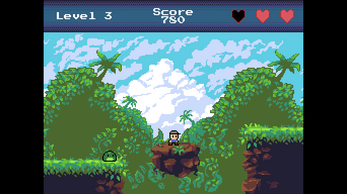 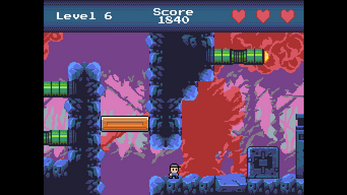 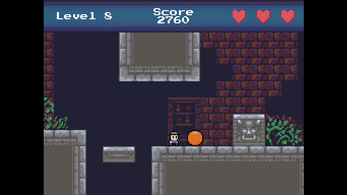 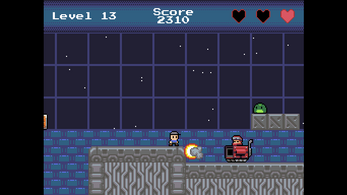